Let’s take a look at the reasons why a 0.75% hike can prove to be bullish for both Bitcoin and Altcoin 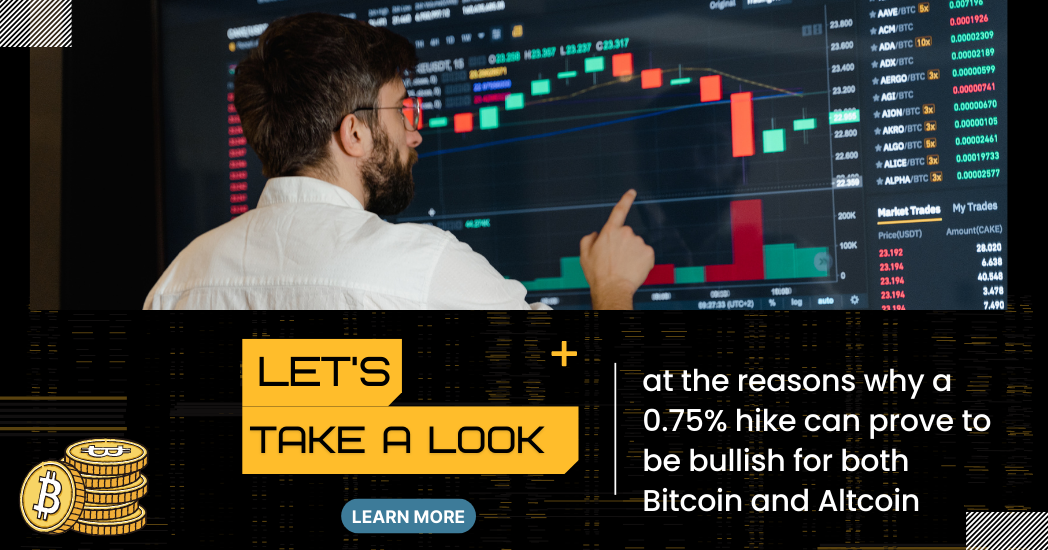 There have been various news doing the rounds regarding the new changes that are about to occur. These new changes are said to bring new rate hikes that will ultimately affect two of the major crypto assets. To shed light on this aspect, this article has delineated the reasons and consequences as well as the nature of the new upcoming reformations. The Federal Reserve has decidedly upon increasing the rate of interest somewhat around the current week and the whole industry is waiting eagerly to witness what consequences it gives rise to.

Expectations of traders from the increase in interest rate

There are a lot of expectations that are hooked to this surge and traders are awaiting to watch how the hike of a meager 0.75% can lead to a rally in the crypto market. As it is now known to those who are associated with the crypto industry, this particular industry is quite volatile and thus prone to fluctuations. It has witnessed various ups and downs of various crypto assets since the time it emerged on the scene but has been able to spread quite a strong base in the financial system.

In recent times, several crypto assets have taken a major hit and have even witnessed their worst downward trend. For example, the S&P and the Nasdaq Composite had to go through one of their worst periods and were even not able to perform properly.

There have been various reasons and concerns that have led to its downfall to a large extent such as the concern that haunts the investors regarding the Federal Reserve’s persistent endeavors to bring about sudden changes in monetary policy. These policies are being put in place to bring about a diversion from inflation however, it could give rise to a recession in the United States.

How did Bitcoin get affected by this?

As Bitcoin has always been in close contact with the S&P 500, it is thus, obvious that it would also witness a fall in its value in recent times. It has been estimated that the fall is going to be almost 9% in recent weeks. It has also been predicted that if this codependency continues, the current situation of the market and the S&P could lead to a further decline of the coin.

There have been various expectations from the Fed and how it plans to bring about a hike in the rates. While some expect it to be on a 75-point basis others have predicted it to be on 100 point basis. However, all the lingering tension in the crypto market has added to its volatile nature and has made all the traders rather eager and impatient. The anticipation and the wait have already started causing more troubles while the wait is still on and the consequences are still uncertain.

However, there is a plus side to it all that can benefit buyers as well as the crypto industry. If the rates decided by the Fed fall in sync with what the market expects from them, it can potentially get more buyers interested in the crypto industry. It can thus act as a factor that could help in adding to the popularity of the crypto industry. But this might not be true for all crypto assets but for some of the most popular ones that have the potential to yield better benefits. One can easily get details on the various cryptocurrencies that are going to go on a positive trend in the coming times.