SuperRare reduces employees by 30% as growth slows during crypto winter. 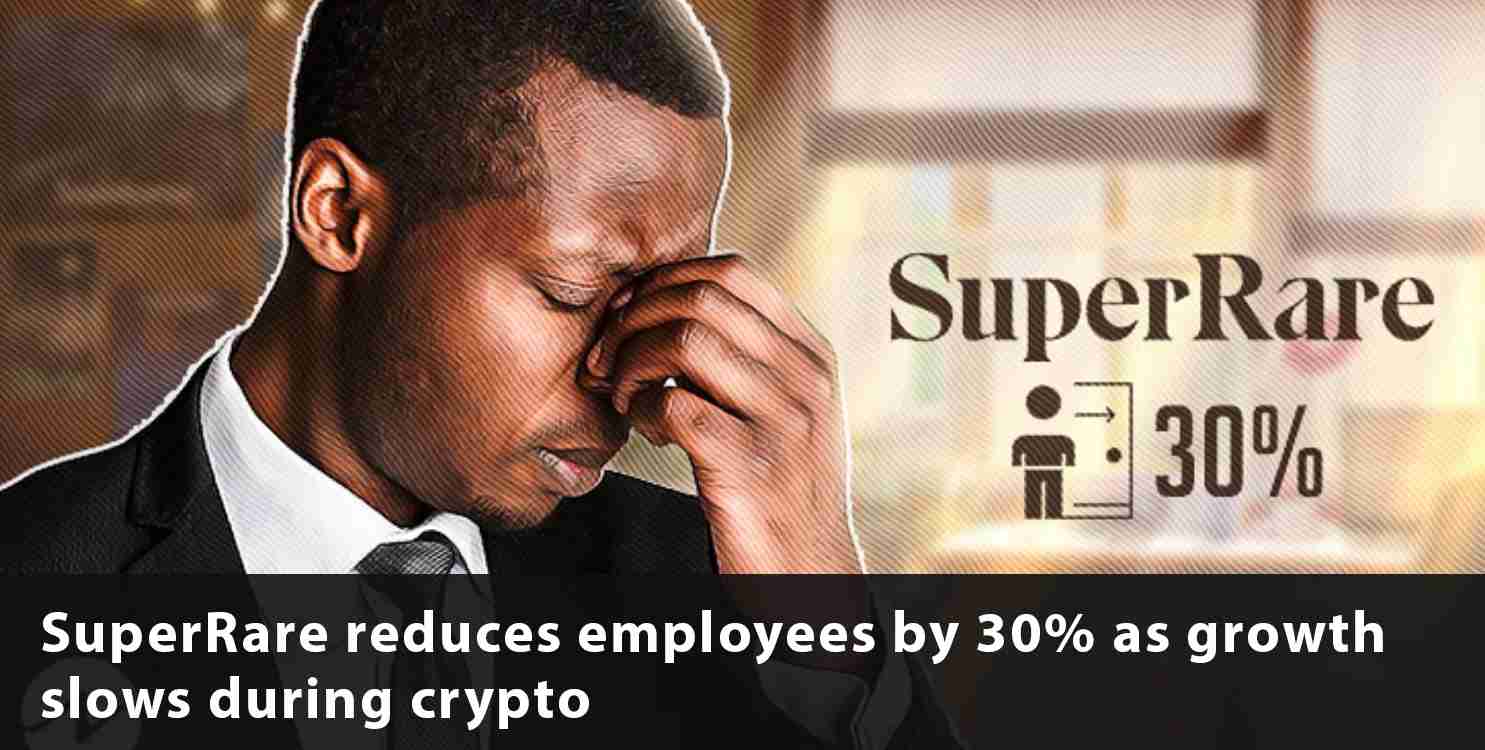 What Exactly Is SuperRare (RARE)?

SuperRare is a major NFT platform, having collected about $250 million in digital art and paid out $3 million in artist royalties so far.  SuperRare originated from its 1.0 iteration, in which the core team hand-picked and approved artists to mint their works as SuperRare NFTs on a shared smart contract. SuperRare 2.0 modified that by offering web-scale curation, autonomously functioning platform stores, and sovereign minting contracts allowing artists to mint, advertise, and sell their works directly to collectors.

SuperRare moved ownership and governance of the network to the community by beginning on this road of gradual decentralisation. SuperRare 2.0 is a decentralised organisation that manages important platform settings, distributes monies from the Community Treasury, and votes on proposed network and protocol enhancements.

SuperRare reduces employees by 30% as growth slows during crypto winter.

SuperRare Labs, the business behind the NFT marketplace SuperRare, became the latest crypto participant to announce job cutbacks on Friday, citing a 30% reduction in its workforce.

The announcement was made by SuperRare CEO John Crain, who tweeted a statement he delivered to Slack workers. Crain cited rapid expansion and over-hiring as causes for the layoff, stating he accepts “all responsibility for this blunder.”

To correct course, he stated that they have made the difficult decision to rightsize its staff, ensuring that SuperRare Labs can continue to serve their community of artists, curators, and collectors while remaining the destination for the world’s finest cryptoart. SuperRare, which debuted in 2018, is a social network for art artists and collectors of NFTs on the Ethereum blockchain. NFTs are blockchain-based tokens that are tied to digital and physical material, proving ownership, legitimacy, or group participation.

Several major figures in sports and entertainment have taken their digital art projects to SuperRare since its inception. SuperRare earned $9 million in a Series A investment round headed by Velvet Sea Ventures and crypto fund 1 confirmation in March 2021. Mark Cuban, Ashton Kutcher’s Sound Ventures, and SamsungNext also participated in the funding round.

During Miami Art Week in November of that year, hip-hop musician and NFT collector Snoop Dogg debuted an NFT collaboration with mixed media artist Coldie on SuperRare. Madonna collaborated with digital artist Beeple to offer an NFT collection on SuperRare in May 2022.

Crain stated that SuperRare will assist people affected by layoffs in transitioning to other opportunities. While the news of the layoff may seem bleak for the firm, Crain sought to remain upbeat in his email to staff, stating that there is still much innovation and revolution to come for digital art and Web3.

He went on to say that while they were facing challenges, there was an enormous untapped potential as they worked to create something altogether new: a global digital creative renaissance that is transparent, fair, and accessible from anywhere on the planet. Decrypt has reached out to SuperRare for more comments but has yet to get a response.

Several crypto firms have declared layoffs just a few days into 2023 as a result of the protracted crypto winter and contagion from the collapses of Terra, Three Arrows Capital, and FTX in 2022. Silvergate Capital is laying off 40% of its workers, Genesis is laying off 30%, and Huobi is laying off 20%.

But it’s not just crypto that’s downsizing: large IT businesses ranging from Salesforce to Amazon are laying off workers as the US economy struggles in the new year.

What Makes SuperRare So Special?

SuperRare 2.0 was created by solving three major issues: A single team’s curation and gatekeeping are not conducive to a large creative ecosystem. Artists deserve as much help as they can get, yet a single team can only do so much. There is no viable method to organise one’s whole collection in the NFT art ecosystem.

SuperRare solved this by offering SuperRare Spaces, which are independently owned SuperRare storefronts that collect art and artists, publicise deals, hold auctions, and earn commissions. Each Space is free to design its own branded ERC-721 coin and ask artists to mint NFTs using it on an as-needed or continuous basis. This allows each Space to become its own self-contained crypto art gallery.

Furthermore, self-sovereign minting contracts enable artists to run a bespoke NFT minting contract, tokenize, and market their art as distinct independent artists. Thus, in addition to minting on a shared contract with other artists, artists might become their own sovereign creative platform.