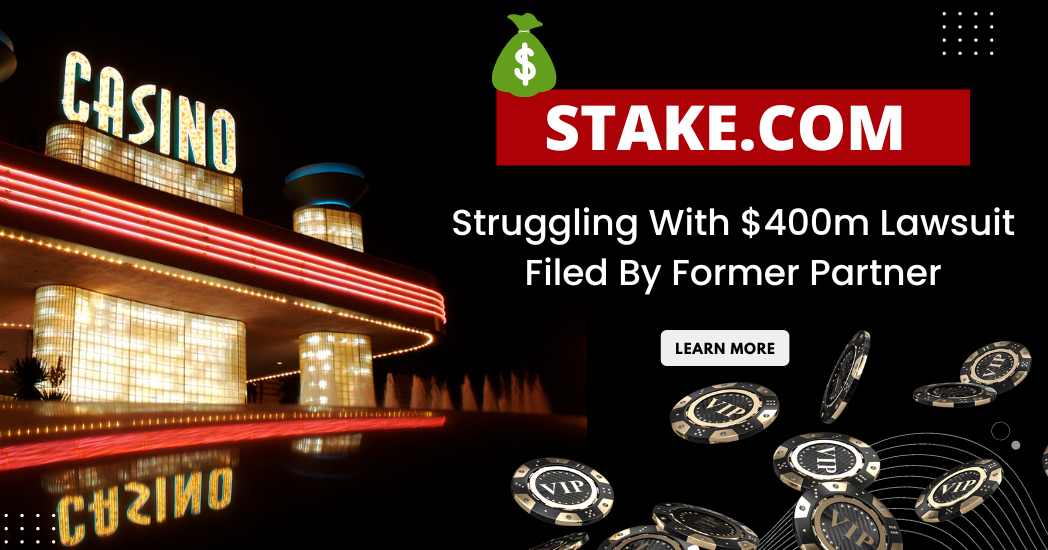 The crypto world is volatile along with unexpected changes. Since the last period of 2021, the whole market is under several issues. The crypto market has been volatile after the last high market cap of $3 trillion. Top cryptocurrencies had lost their value. Now another issue has arisen. Once again a lawsuit hit the crypto industry. A single crypto platform is in a troublesome situation. Primarily, it was in the spotlight that Stake.com, the former partner of one of the biggest Bitcoin casinos in the world, was suing the founders of the platform.

What Is The Matter?

Recently, it was reported that the former partner Christopher Freeman lodged a civil lawsuit in the Southern District of New York. According to the filing, he claimed $400 million as punitive damages claiming that he was deceived into straying away from the formulation of Stake.com.

The creators of Stake.com, Ed Craven and Bijan Tehrani have been living luxurious lives. The recent investigation says that their recently bought costly houses were being held against them. He also stated that the firm had processed nearly $100 billion in bets. Freeman utilized all the money to take the success of the Bitcoin casino into the spotlight.

The existing data shows that Tehrani and Freeman, both passed out from the same primary and high school. They met at Craven University in 2013. At that time the duo decided to set up a casino business called Primedice. Freeman partnered with 20 percent in Primedice. On the other side, Tehrani and Craven held 40 percent. This was a sample of their initial investment.

Though, Freeman’s stake dropped to 14 percent within nine months. This was a kind of result of rewarding other members of the development team. After that, Freeman implemented the idea of a crypto casino in 2016. Freeman claimed that the other two candidates were not interested because of the scare around regulations.

As a reentry, both have decided to go ahead with Stake.com while Freeman stated to be left high and dry. Tehrani and Craven invited Freeman to move to Australia if he wants to be a part of the crypto casino.

According to  Freeman’s court, when Stake.com came up as a virtual casino including a competing online dice game and many other features Freeman had proposed. Tehrani and Craven affirmatively tried to deplete Freeman’s concern at having been misled by supporting that he still retained his stake in Primedice. Additionally, Freeman alleged that he was l

blocked out of Primedice also.

The founders of Stake.com strictly rejected Freeman’s claims, considering them false. The firm also stated that the lawsuit was intended to spread incorrect information.

According to the statement, the complaint, that was filed by Chris Freeman, fills allegations that are internally inconsistent, intentionally misleading, and false with proof.

The betting company is trusted to be an off-shore one. It was started in Melbourne, Australia, in 2017.

The company hired Canadian pop star Drake as an ambassador. The company is the lead jersey sponsor of the English Premier League, that is, the soccer team. Stake.com is allotted to be worth up to $1 billion. The founders of Stake.com stated that the company did not intend to compensate Freeman with $400 million. They claim Freeman’s lawsuit was a “desperate attempt” to spread FUD over the company and the court would dismiss it.