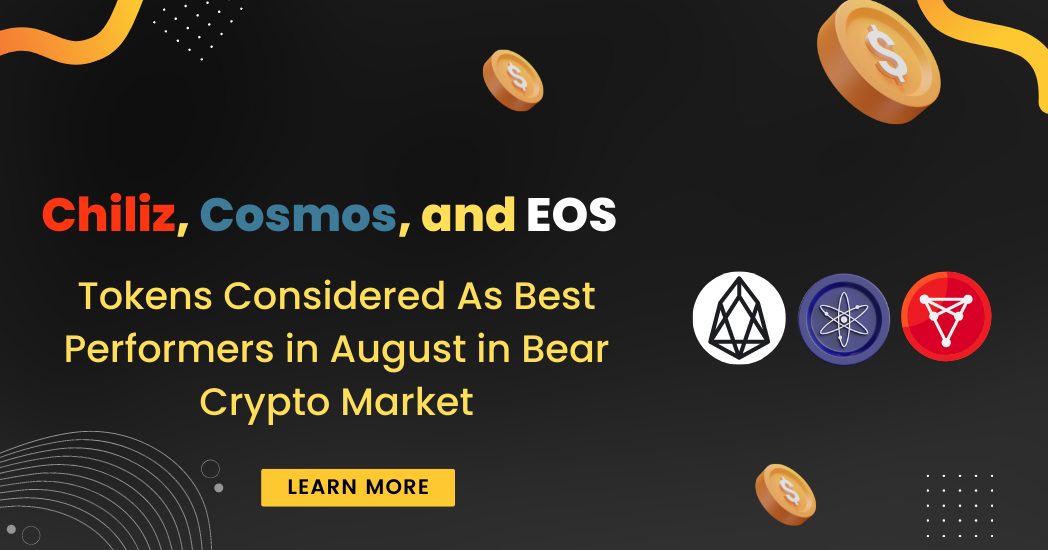 After a massive crypto crash, the global crypto market started its new upward journey. But, later, it again notably falls. The last high market cap was $3 trillion in November 2021.

The declines beginning about mid-month came after the reveal of minutes of the Federal Reserve’s July meeting strictly suggested that the central bank will try to fight against inflation.

The top cryptocurrency Bitcoin has fallen 13% over the last month. On the other hand, the second top coin, Ether, fell about 20%. Though, the recent data shows that not all cryptocurrencies fell like BTC and ETH. Because there is so much positive news circulating over the internet. Also, several networks are focusing on their upcoming upgrade. That led the investors to participate in the networks.

The Best Performer Of August :

This is a token issued by Socios.com. It is a blockchain-enabled sports entertainment platform. Chili was the biggest winner of the month. As the platform received regulatory approval to operate in Italy, Its native token CHZ hit 75.8% in August.

Cosmos’ native token, ATOM, also performed well. It rose by 14.5%. The raise was noticed during the project announcement. The announcement stated its tokenomics redesign at its upcoming conference in Medellin, Colombia, in late September.

Antelope announced that it would act as the supporting protocol for EOSIO-based blockchains. That spurred the 3.6% surge in the EOS token last month.

The head of research at Arca, Katie Talati, considered the news-related price spikes as “healthy to see in terms of asset dispersion” among investors. Arka is an asset-management firm.

Referring to the correlation between Cosmos’ tokenomics redesign and its raising token’s rate, Talati stated that it’s interesting as in a bear market, technically, a lot of the tokenomics tend to be what drives one’s rate changes that they see a lot more of, versus in the bull market where it’s like any old announcement and users get excited.

However, negative news was behind the price drop of other major altcoins. In early August, a $6 million exploit on the Solana platform following the theft of tokens from more than 9,000 hot wallets caused SOL’s 25.7% decline.

On the other hand, Ripple’s XRP dropped 14.1% and Avalanche’s AVAX declined 19.1%. It happened after a self-described whistleblower accused Ava Labs, which is the company behind the Avalanche blockchain.

Talati explained that she will be focusing on the Merge, which is a major software update for the Ethereum blockchain along with crypto conferences in September. It will be eyeing, Singapore Blockchain Week and the Ethereum Developer Conference, for news and events that might impact altcoins’ prices.

Notably, the global crypto market has been facing a hard time since the last period of 2021. In November, it touched its last highest market cap. Later, it rapidly fell due to several reasons. Though, the market was still in the spotlight for several upgrades. While Ether starts to focus on its Ethereum Beacon merge. Also, Cardano goes ahead with Vasil Hard Fork.  Recently, both upgrade’s launching dates have been announced, which is in September.

Additionally, several regulations are taking place in the market. Countries like Japan, the US, and Canada are taking that virtual world very seriously. It has the potential to grow in the future on different platforms. Now the platforms are shifting towards web3 from web2. Along with Metaverse projects, there are so many gaming platforms being introduced into that virtual space. It is anticipated that after a couple of years, crypto will be used as an exchangeable component in every country.